Virality and Isolation in the Era of Deepening Divides 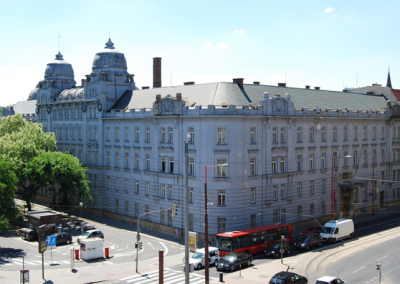 Located near the left bank of the Danube River and Šafárik Square in the Old Town of Bratislava is the beautiful light-blue building of the Faculty of Arts of Comenius University.

Though the faculty building is on Gondova street, from Vajanského street on the side of the building, you can access Moyzes Hall. Richly decorated in the Art Nouveau style, it hosts classical music concerts, and various academic and other public events. Atrium, which creates the centre of the building, is a remarkable space where students can study inside while still soaking in the sunshine due to the glass roof above.

The Old Town is rich with culture and history, along with possibilities for shopping and leisure. Eurovea, one of the biggest and most modern shopping centres, is just a few minutes away along the river. Over the river, connecting its two banks is the famous Bridge of the Slovak National Uprising, nicknamed the UFO Bridge due to the flying saucer-shaped structure atop the pylon – inside is an observation deck and a restaurant, itself named UFO.

History of Faculty of Arts 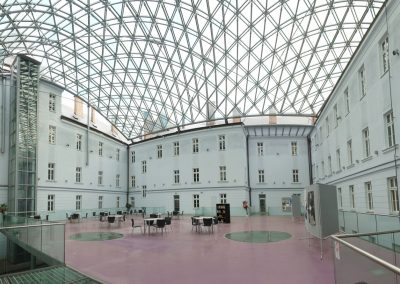 The Faculty of Arts was the third faculty of Comenius University after its establishment in 1919, starting its activity in September 1921. After Czechoslovakia was established in October 1918, there was a need for a Slovak university. Most of the professors at the Elisabeth University in Bratislava emigrated to Hungary following the disintegration of Austria-Hungary, and it was clear that this Slovak university would suffer from an acute shortage of professors and associate professors capable of lecturing and running schools. The need to undertake scholarly research into the nation’s history, language, literature, and art was obvious, and so the Faculty of Arts was created, with seven newly appointed professors commencing lectures and seminars for the first 30 full-time students and 34 students with individual courses of study. Many changes followed; the main building served as the Ministry for the administration of Slovakia with Vavro Šrobár, the only Slovak political representative in Prague for the establishment of the independent Czech-Slovak state, in the lead; and notably the taking of power by the Communist Party in February 1948. Academic freedom of study and scientific research soon ceased to exist, and many professors were dismissed from service or forbidden to teach. During the Velvet Revolution in November 1989, which overthrew the totalitarian regime, the students and lecturers of the Faculty of Arts were most actively involved in the fight for social change. Traditional academic rights and freedoms were restored – the academic community freely elected a dean at the beginning of December 1989 after many years. Since then, more than 30,000 students have graduated and now contribute to the development of knowledge and culture all around the world.

In the beautiful light-blue building, many treasures were hidden and indeed, are still there. The remnants of beautiful ornamental decoration from the times of the officers’ casino were discovered under the Moyzes Hall during its renovation, a modern roofed atrium serves as an invaluable place for students to study and relax, and giant ancient helmet statues were renovated and now adorn the roof of the building. 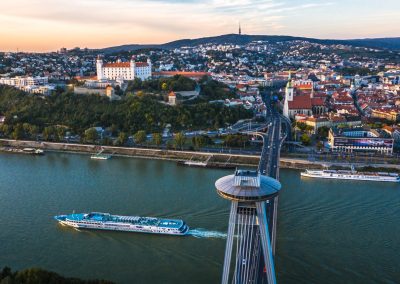 Bratislava is an important railway junction, which means that within Europe, environmentally friendly travel by train is usually easily accessible. The EuroCity trains connect Germany, Slovakia, and Hungary, and thus provide great access to affordable travel.

Though the city is very walkable, in Bratislava, the best way to efficiently get around is by public transport; this includes trams, buses, or trolleybuses. Through this link, you can look at the frequently asked questions regarding the types of tickets, which one would be most suitable for your travels during your stay in Bratislava, the location of stations or stops within a walking distance from you, and the times of arrivals and departures. More information about traveling within Bratislava is available here. 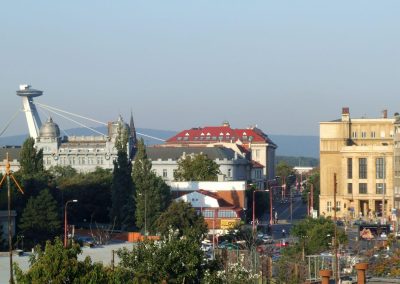 The best way to comfortably stay in Bratislava while visiting is in a hotel. You can find whatever would be appropriate for all your needs and wishes on this link. This is also a good thing to be able to visit various tourist attractions in the Old Town, all in immediate proximity to the Faculty of Arts. The hotels anywhere in the Old Town are ideal for visitors of our faculty and the historic venues Bratislava has to offer, among them the Bratislava castle, the Blue Church, the UFO Bridge, or the Slovak National Theatre and Slovak Philharmonic Orchestra. For other attractions in Bratislava or the surrounding region, you can look through the vast number of possibilities on this site. 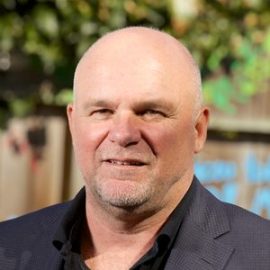 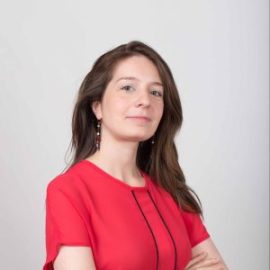 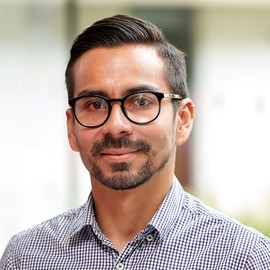 If you’re interested in sponsoring TIC 2023, please contact us for more information. We’re on hand to create a package that meets your needs, so do not hesitate to get in touch at: registration@tic-conference.eu.